Today we are promised a tough hike across deep valleys and over high hills above the Jordan valley before scrambling down a rocky gorge to Ain Auja (Auja spring).  We are entering the wilderness on the western fringe of the Jordan valley.  Tonight we will camp with Bedouin* shepherds at sea-level near Al-Auja: tomorrow it is all downhill to Jericho!

We set out along a dry stone valley, passing nomadic Bedouin camped on the hillside.

Very soon the wadi gets rougher and steeper.  We could see rock hyrax scampering along ledges, sheep and goats near the summit, hearing their bells before we spotted them. 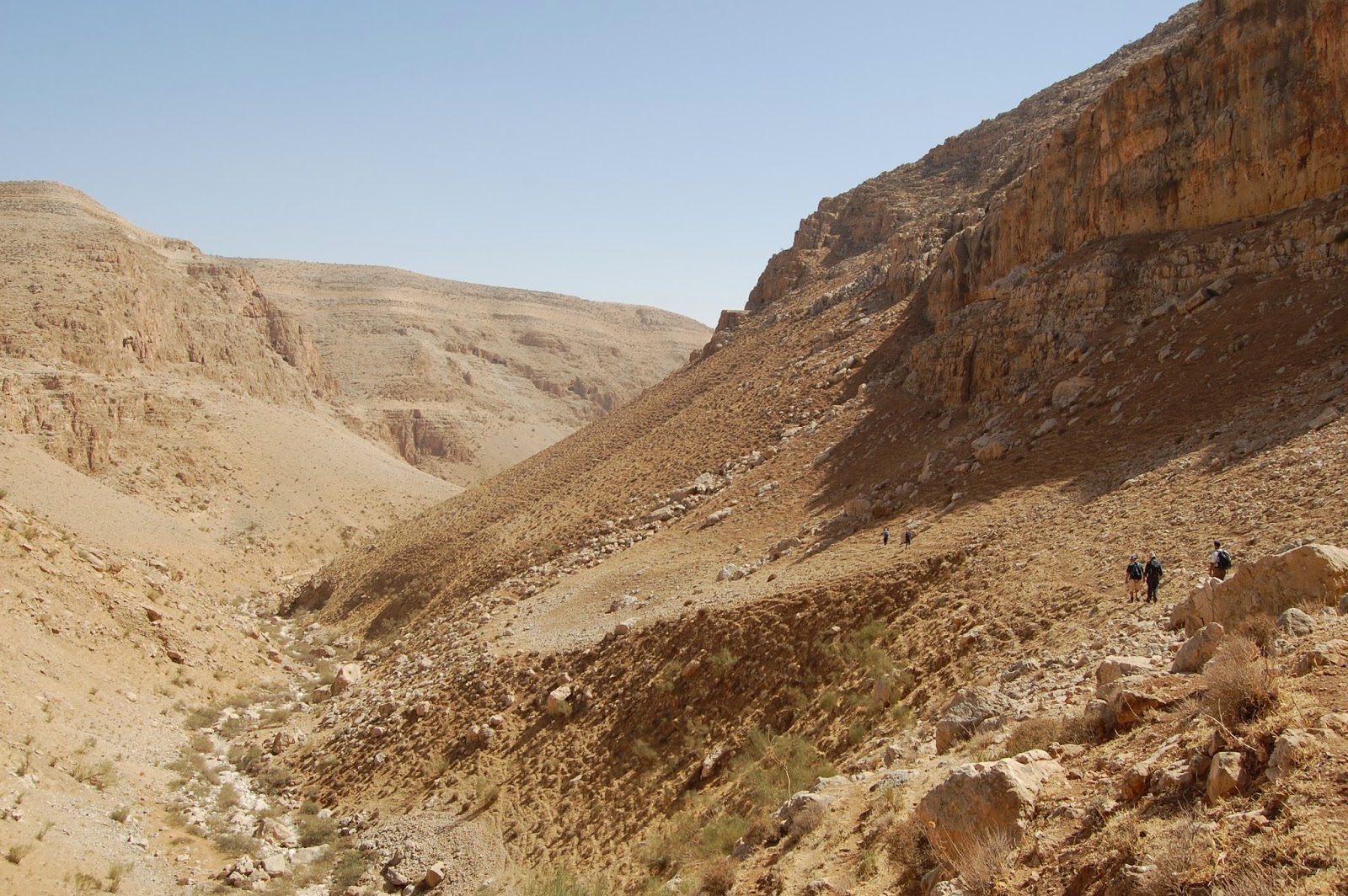 Eventually we reached the spring at Ain Auja.
﻿﻿
﻿

As you proceed to baggage claim at Tel Aviv's Ben Gurion airport you pass a gigantic fountain of gushing water, the irony is lost on most -  'Welcome to Israel' where water, or rather its distribution, is a major human rights issue.  Ain Auja was the largest and most important spring in the dry Jordan valley.  For millennia, every year 9 million cubic meters of crystal clear water flowed out of the desert rock.  Over the past few decades Israel has systematically seized land in the northern Jordan valley and in doing so has illegally** taken control of most of the water resources.  Now depleted and sometimes dry, Ain Auja has become polluted with sewerage run off.  There are eight settlements that surround the village of Al-Auja, their water allocation is four times per capita that of their Palestinian neighbours.  What's more, since the water channel to the village is in Area C, leaks cannot be repaired nor can further wells be dug without a permit.  As you look across the valley it's not difficult to differentiate between Israeli and Palestinian farmland!


We camped at a Bedouin village.  A family of 15 adults and their children live here.  The flock of some 400 goats is owned by the 'head' who shepherds their care amongst the extended family.  We met a young boy, Mohammad, returning with 73 goats from a day's grazing.  He could not read, write or count but always knew if one of the flock was missing.
﻿
﻿

*Bedouin:  It is hard to see the Bedouin, living in makeshift camps dispersed along the road, struggling to retain their traditional livelihood, religion and culture in this vanishing landscape.  Most of the Bedouins who live here belong to the al-Jahalin tribe.  Originally from the Negev they were expelled at the beginning of the 1950s and resettled mainly east of Hebron and around al-Khan al-Ahmar, between Jerusalem and Jericho.  However as of 1967, they have been constantly displaced towards the worst land, and far from water sources.  The occupation authorities confiscated their land under the pretext that it was uncultivated, although it was clear that it was Bedouin pastureland.  First transformed into military zones, many of these territories were later used for Jewish settlements, the first of which was Ma'ale Adumin.  In 1997, in the middle of the 'peace process', new expulsions gave this settlement more room to grow.  Hundreds of people were forcibly resettled on the outskirts of al-Azariya, overlooking the municipal garbage dump.  Others, in Anata for example, are now loosing land to the Wall and many of their shacks have recently been demolished by the Israeli authorities.
The pastoral way of life of the Bedouins continues, but on a much smaller scale because of the drastic reduction in pastureland.  Flocks once numbering 20,000 head are now less than 4,000 and the Bedouin who until recently provided 60% of the meat and dairy produce of the Palestinian economy are now hard hit.  In addition, water scarcity (water has to be bought from tankers) limits the number of animals that can be raised.  Besides this, the sale of animal products of any kind in Jerusalem or Israel proper is forbidden, and a 'sanitary cordon' prevents distribution to the West Bank and Gaza, effectively outlawing the chief source of Bedouin livelihood.  As a result Bedouin men now work in factories in Israel or as construction workers in Jewish settlements if they can obtain the necessary movement permits which have become increasingly restrictive and more difficult to obtain.
adapted from Palestine and the Palestinians, pub. by. Alternative Tourism Group, 2008

**in violation of the Fourth Geneva Convention and numerous UN Resolutions