We were woken by the sun rising over Jordan, which came piercing into the open side of our tent, announced by a chorus of barking dogs.

A shorter walk today through desert terrain along an old road to the oasis town of Jericho, 850' below sea-level, and with many Old Testament references possibly the world's oldest continually inhabited town.


Here we would say 'goodbye' to Nidal S and meet our new guide Nidal R (who turned out to be my next door neighbour when I had stayed in Beit Sahour in 2011).  After a few hours the 12th century (Greek Orthodox) Monastery of the Qurantul (the Forty) comes into view, clinging like a swallow's nest to the cliff face summit of Jebel Qurantal (Mount of the Forty), 980' (but rising 1830' above Jericho).

﻿﻿﻿﻿
﻿
Whilst the distant view is jaw-dropping, closer the unsightly brightly coloured cable-cars seem incongruous with the surroundings.

The site is beautifully described by WM Thomson in The Land and the Book (1897)
Directly west, at the distance of a mile and a half, is the high and precipitous mountain called Quarantania, from a tradition that our Saviour here fasted forty days and forty nights, and also that this is the 'high mountain' from whose top the tempter exhibited ‘all the kingdoms of the world, and the glory of them’.  The side facing the plain is as perpendicular, and apparently as high as the rock of Gibraltar, and upon the very summit are still visible the ruins of an ancient convent.  Midway below are caverns hewn in the perpendicular where hermits formerly retired to fast and pray in imitation of the 'forty days' and it is said that even at the present time there is to be found an occasional Copt or Abyssinian languishing out his quarantania in this doleful place.  We found it, however, inhabited only by 'Bedawin', several of whom made their appearance, well armed, many hundred feet above us.

The thought of a few armed Bedawin was tempting and after a much needed shower at our hotel ( ! ) we set off, first for a tour of the Umayyad period (8th century) Hisham's Palace.

After lunch we did our own thing.  Iain went for a float on the Dead Sea, Lars and I visited the SIRA (Swedish International Relief Association) Special Education School with which he is involved and Johannes went into town for a beer.

If you wish to take a short self-guided tour of Jericho you can’t go far wrong than seek out Zacchaeus’s Tree. (In the Holy Land you can adopt this method with almost any Biblical event.)

And Jesus entered and passed through Jericho.
And, behold, there was a man named Zacchaeus, which was the chief among the publicans, and he was rich.
And he sought to see Jesus who he was; and could not for the press, because he was little of stature.
And he ran before, and climbed up into a sycomore tree to see him: for he was to pass that way.
And when Jesus came to the place, he looked up, and saw him, and said unto him, Zacchaeus, make haste, and come down; for to day I must abide at thy house.
And he made haste, and came down, and received him joyfully.
And when they saw it, they all murmured, saying, That he was gone to be guest with a man that is a sinner.
And Zacchaeus stood, and said unto the Lord: Behold, Lord, the half of my goods I give to the poor; and if I have taken any thing from any man by false accusation, I restore him fourfold.
And Jesus said unto him, This day is salvation come to this house, forsomuch as he also is a son of Abraham.
For the Son of man is come to seek and to save that which was lost.
Luke 19.1-10,

Follow the 'tourist' signs (or buses) to 'ain es-Sultan street and in the garden of what is now the 'Russian Cultural Centre and Holy Land Museum' is Zacchaeus's tree - a fine 2000 year old sycamore fig. 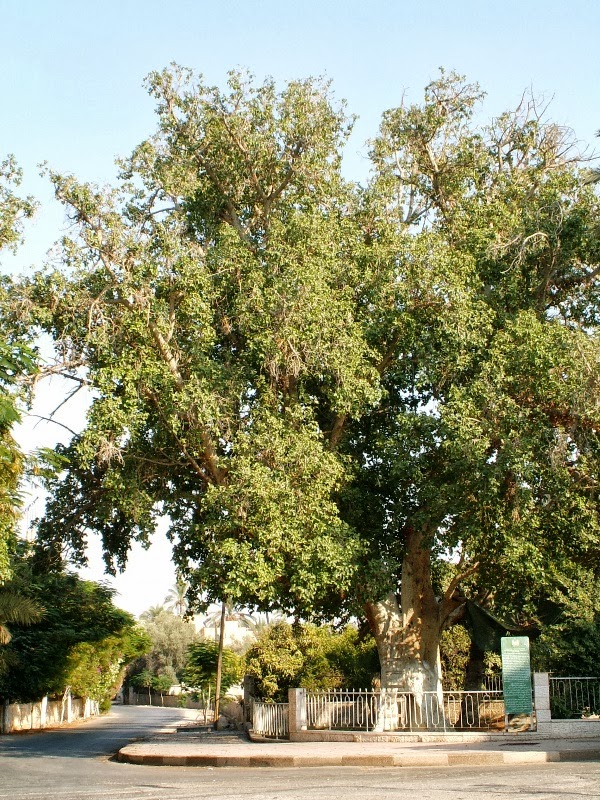 ﻿
﻿
﻿
You don't have to walk far to find its rival.  Outside the Greek Orthodox Church, protected in a glass case, behold the trunk of Zacchaeus's tree - not well preserved after 2000 years. 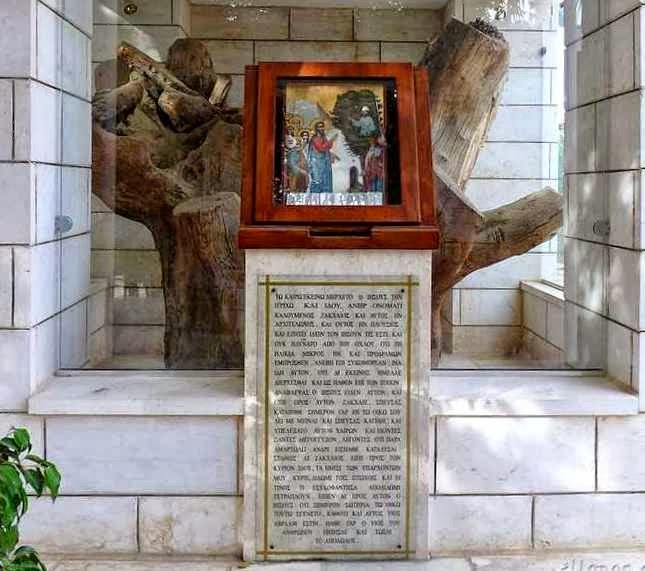 Confused?  Ask one of the Franciscan brothers at the Church of the Good Shepherd a few yards up the road and he will point you to a fine tree on a grassy area behind the church.